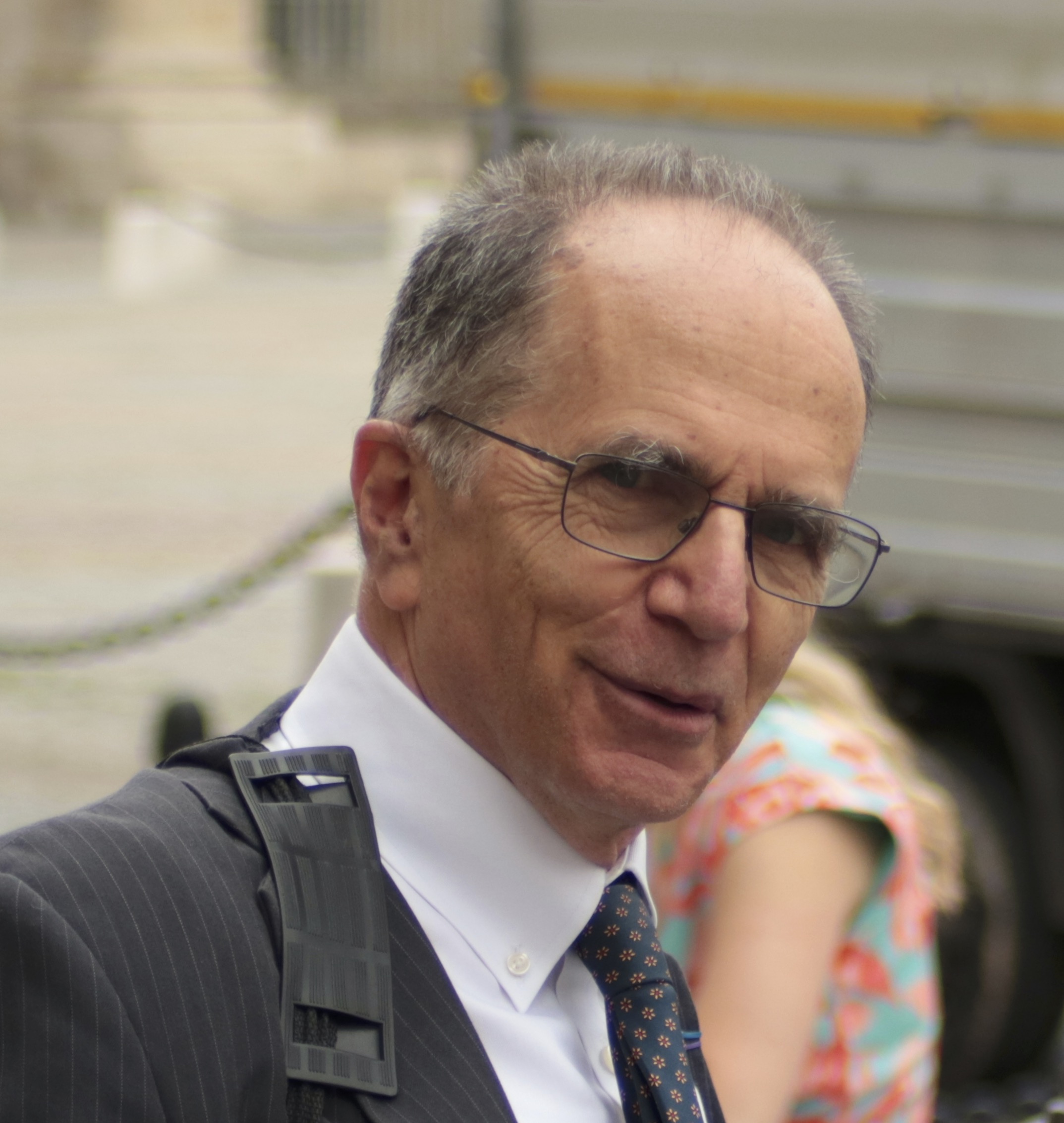 My professional activities are organised around several axes, the main ones being working on my research and acting as President of the Initiative for Science in Europe. Details are given below.

My interests are in the theory of Lie groups and their representations. I worked successively on the Plancherel formula for groups (applying the method of orbits to unimodular complex Lie groups – reference 1), on an a fragment “at infinity” of Langlands’ programme (study of L-functions associated to representations of real reductive groups – references 2, 6, 7) and on quantization. I first defined, with D. Manchon, a symbolic calculus for difference operators (reference 8). Then I worked, with S. Sahi, A. Dvorsky and Ch. Torossian on the application of Kontsevich’s deformation quantization to the Duflo isomorphism and to the Kashiwara-Vergne conjecture – references 9 and 10).

I work mainly on the history of mathematics in the 20th century, and in particular on the history of scientific institutions. In my 1994 article (1), I described the central importance of the École normale supérieure in the development of mathematics in France since the end of the 19th century, while emphasising that the normaliens, until the 1980s, worked mainly in “pure” mathematics — with as notable exceptions Jean Leray and Jacques-Louis Lions. After Leray’s death in 1998, I had the opportunity to write notices (2, 3) on this great figure of applied mathematics, whose work in pure mathematics had a considerable influence after the Second War. In my article on the creation of the Société mathématique de France (4), I looked at the transition that took place in the 1870s, with the structuring of a body of professional mathematicians and the transition from the École polytechnique to the École normale supérieure as the dominant institution.

Publications in the History of Science

Although I do not have a real philosophical training, it seems to me essential to take a philosophical perspective on science as a scientist. I have thus reflected on the place of science in culture, starting from the observation that, in the common discourse, it is excluded, considered only as a set of technical devices (articles 1. 2. and 3. of 1987 in the bibliography), on the particular place occupied by mathematical texts (4, 5), on the status of error in science (6), and on the mathematics-politics link (7, 8).

When one is interested in the history of science or in science policy, an indispensable insight comes from sociology. In my work on the development of mathematics in France in the 20th century (référence 1), I had highlighted the mutation that had occurred in the 1950s: the École normale supérieure, whose previous main purpose was to train high school teachers, had become mostly a nursery for academics. In References 1 and 2, I studied the trajectories of the speakers at the 2014 International Congress of Mathematicians from the perspective of their international mobility during their studies, at the time of the PhD, and afterwards. In reference 3, I reported on the very thorough work of a team around Pierre-Michel Menger on the specificities of academic careers in mathematics in France.

Traditionally, and particularly in France, the teaching of mathematics has been reduced to its purely deductive dimension, and the rigour of reasoning was the only criterion of quality. This results in courses where the mode of exposition is “definition-theorem-proof”, possibly followed by an example. In article 1. I wanted to highlight that there were also two approaches at work: describe a mathematical situation, experiment with it ; the deductive phase comes later . Even if the arguments I proposed in this article are still quite relevant, the evolution of the last fifteen or twenty years in the teaching of mathematics in secondary schools in France has led to a lame compromise between observation, experiment and deduction that needs to be reviewed.

I was a member of the Scientific and Pedagogical Council of the Foundation La main à la pâte between 2012 and 2021 ; I was particularly, but not exclusively, involved in the inclusion of mathematics in the scope of the Foundation.

It has been a long time since we believed in the triumphant advance of science, which would gradually solve all of society’s problems. There have been many crises, from Hiroshima to the power of artificial intelligence, via genetic manipulation and many other controversies. There has been a shift from faith in science to distrust and even rejection. Scientists thought that if they could better explain what they were doing, the mistrust would dissipate. While the work of popularising science is essential, we know that it is not enough. We cannot dissociate the explanation of scientific progress from the discussion of its social effects, as we can see particularly well now with the climate crisis. Mathematics is no exception to this, even if the work of mediation is often more complex.

From 1986 onwards, I devoted part of my time to various mathematical communication activities. The President of the French Mathematical Society, Jean-François Méla, appointed me as editor of the Gazette des mathématiciens, a position which I held until 1990. In December 1987, the first major communication initiative led by the French mathematical community took place, the conference Mathématiques à venir . With Jean-Michel Kantor and Jean-Marie Schwartz, I led the “Communication and Media Relations” unit of the conference, and the Gazette also published several articles related to the conference.

In 1997, I became Vice-President of the Société mathématique de France under the Presidency of Jean-Jacques Risler, in charge of communication. I became aware of the gulf of mutual incomprehension between the mathematical community (teaching and research) and the outside world and in particular the media. Understanding and explaining have become my line of action in this respect and I regularly intervene in the media on issues related to mathematics research and teaching.

During my term of office at the SMF, one of the subjects was the recent reform of the lycées initiated by Education Ministers Jospin and continued by his sucessor Bayrou, which had led to the merging of the three scientific series C, D and E of the general lycée into a single series. Mathematicians were concerned (already!) about the consequences this would have for the mathematical training of students destined for advanced studies in science. At the same time, we looked at the poor results of our students in the International Mathematical Olympiads, which seemed to be getting worse with the reform of the lycée. More generally, this raised the question of the insufficient presence of the so-called informal activities (this refers to optional activities, taking place outside the classroom and outside the school curriculum). There was a fairly rich network of entities promoting such activities, but it was far from being at a level comparable to what existed in many countries. The idea was born to create a new association that would take charge of the preparation of the mathematics olympiads, but would also promote activities aimed at all young people, girls and boys, with an interest or curiosity for mathematics, such as school mathematics clubs. It would also be the umbrella organisation for extracurricular mathematics activities. The new association, created in 1998, was named Animath, and I was appointed President. I was president until 2017, when Fabrice Rouillier brilliantly took over from me and gave it a new impetus, particularly during the Covid crisis, by “dematherialising” the activities. I remained on the Board of Directors and Vice-President of the association until 2022.
An association thrives when it manages to obtain sufficient funding, through its volunteers and by the interest of the actions that are carried out. I will not go into detail here about the actions carried out by Animath, for which one can refer to the website, I will simply mention three points:

Apart from my role in Animath, I launched in 2005 the public lectures Un texte, un mathématicien , coorganised by the SMF and the Bibliothèque nationale de France, and I remained its chief organiser until 2013, and member of its scientific comittee until now. I have been since 2007 vice-president of the Science ouverte association, whose main field of action is Seine-Saint-Denis and which works to make science a lever for emancipation.

Publications of and on mathematical outreach

While my general political views and commitments do not belong on a professional page, those related to higher education and research are on the border, and it is relevant to present them here.

In the beginning of the 1980s I began to engage, in various ways, with these issues in the French context. In 1981, on the fringes of the research symposium organised by the new Minister of Research, J.-P. Chevènement, I became involved in the Collectif de liaison, d’action et d’intervention sur la recherche (CLAIR). If we were satisfied with the fact that the new Government recognised the importance of research, after almost ten years of glaciation, there was at the same time hope and concern. The hope was that there would be a strong evolution of the French trinity: universities/grandes écoles and classes préparatoires/research organisations. The concern was the emergence of a form of instrumentalisation of research for innovation, economic development and the needs of society. While this period is rightly remembered as having been rather favourable to higher education and research, our concerns were justified, and our hopes were indeed disappointed.
A second highlight for me was my involvement in Sauvons la recherche and my participation as an associate member of the Initiative Committee of the Etats généraux de la recherche in 2004.
In 2008, I joined the Higher Education and Research division of Terra Nova, and became its coordinator in 2012 with the physicist Laurent Daudet. I have bee sole in charge since 2020. I have published, mostly with other co-authors, a number of Notes on different subjects.
I have also published several reports on Jean-François Méla’s blog, as well as a number of articles in various newspapers. For all of theses, references are in the bibliography.

Publications on Higher Education and Research Policies in France

In 2017, I was appointed president of the association Initiative for Science in Europe , as the successor of Professor Maria Leptin. ISE members are European learned societies that have come together to try to influence policy decisions concerning research in Europe. Here Europe is understood in the sense of the Council of Europe, and is not limited to the European Union, even if the latter plays a central role. ISE was created in 2004 to promote what seemed at the time to be a crazy dream, the European Research Council. Since I became as president, we intervened on the structure and budget of the European framework programmes (currently Horizon Europe), on the careers and Precarity of Young Researchers Careers, on Open Science, on Scientific Advice, etc. This work resulted in reports written collectively, some of which are in the bibliography.

Since 2008, I have been heavily involved in the Euroscience association (see above in the paragraph Interactions sciences et société. Some of Euroscience’s objectives have a strictly policies dimension, while others are more about the relationship between science and society.

In the course of my career, I have held a number of positions or sat on a number of academic bodies in the institutions where I have worked (University of Paris 7 (now University of Paris-Cité), École Normale Supérieure, University of Versailles-Saint-Quentin), participated in juries for competitive examinations, organised or co-organised colloquia, seminars and scientific days. You can find the list in my CV

I have taught at all levels, from first to fifth year of University, in highly selective institutions (Lycée Louis-le-Grand, École Normale Supérieure, Massachusetts Institute of Technology) as well as in universities with little or no selectivity (Université Paris 7, Rutgers University). At the very beginning of my career, I co-authored mathematics exercise books, and later co-edited the DIA series of university-level books published by Belin.

My CV (in French)