In honor of Prof. Vincent Cossart on his 60th birthday 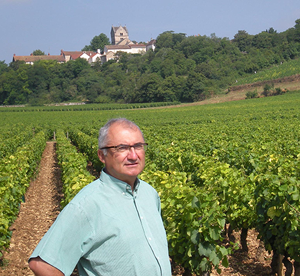 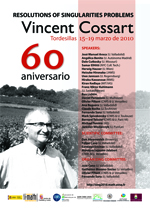 A typical problem in the area of resolution appears whenever we -x a
hypersurface $X$, embedded in a smooth scheme, with points of multiplicity at most $n$. The problem is to de-fine a sequence of monoidal transformations with centers included in the $n$-fold points of $X$ (and its successive transforms) so that the -nal strict transform of X has no $n$-fold points.

If $X$ is defi-ned over a -eld of characteristic 0, to each sequence of transformations, one can attach a monomial ideal supported on the exceptional locus. If some particular conditions hold (monomial case), the combinatorial resolution of this ideal implies resolution of singularities.

Suppose that $R$ is a local domain essentially of finite type over a field of characteristic $0$, and $\nu$ a valuation of the quotient field of $R$ which dominates $R$. The rank of such a valuation often increases upon extending the valuation to a valuation dominating $\hat R$, the completion of $R$. When the rank of $\nu$ is $1$, Cutkosky and Ghezzi handle this phenomenon by resolving the prime ideal of infinite value, but give an example showing that when the rank is greater than $1$, there is no natural ideal in $\hat R$ that leads to this obstruction. We extend their result on the resolution of prime ideals of infinite value to valuations of arbitrary rank. (Joint work with S. Dale Cutkosky.)

We show how the invariant for the resolution of surfaces in characteristic zero has to be understood so as to be applicable also in positive characteristic.

For varieties over fields of characteristic zero there are very strong results (by Hironaka and several others) on resolution of singularities: a canonical and to a certain extent also functorial procedure by so-called permissible blow-ups.

Even in dimension 2, where one has several methods (e.g., a procedure by Lipman using alternately normalization and blow-ups in points), there were until recently no results on strong resolution as described above.

I will report on joint work with V. Cossart and S. Saito, in which we fill this gap. We can even treat non-irreducible or non-reducible schemes, as well as “boundaries” on them.

The Idealistic Filtration Program (IFP) is one of the approaches to resolution of singularities over an algebraically closed field of arbitrary characteristic, which I proposed and developed with K. Matsuki. In my talk, I will give an introduction to IFP and explain some partial results.

The local structure of formal flat meromorphic connections on a smooth complex algebraic or analytic variety was studied by Malgrange and Sabbah. One gets a good analogue of the Turrittin-Levelt-Hukuhara decomposition at each point away from a closed subvariety of codimension at least 2, called the turning locus. We establish that one can locally blow up in the turning locus so as to obtain good decompositions at all points. The obstruction to extending this construction to a global blowup seems to be a form of embedded resolution of singularities for certain virtual closed subschemes (nef b-divisors).

Elimination of wild ramification is used in the structure theory of valued function fields, with applications in areas such as local uniformization and the model theory of valued fields. I will give a survey on the role that Artin-Schreier extensions play in the elimination of wild ramification and corresponding main results on the structure of valued function fields. Further, I will describe a classification of Artin-Schreier extensions with non-trivial defect. It can be used to improve one of these main theorems (“Henselian Rationality”); this is recent work based on discussions with Michael Temkin. Finally, I will state several open problems.

Let $X$ be an algebraic or formal variety over a perfect field, and let us assume the existence of a resolution of singularities of $X$. In the midsixties, J. Nash proposed to study the essential divisorial valuations of X (i.e. appearing modulo birational equivalence in every resolution of singularities of $X$) from the space of arcs of $X$.
We will explain some of the main ideas that have been applied in the Nash problem. In particular, we will emphasize the underlying idea in our common work with V. Cossart [CPR].[CPR] V. Cossart, O. Piltant, A.J. Reguera, Divisorial valuations dominating rational surface singularities, Fields Institute Communications series. Amer. Math.Soc. 32, 89-101 (2002).

In view of the birational reduction of singularities for one dimensional foliations in an ambient projective variety of dimension three, in a joint work with F. Cano and M. Spivakovsky, we establish the existence of a Local Uniformization in the sense of Zariski. The patching procedure, similar to the one given by Zariski in the case of varieties, of which an axiomatic adaptation was given by O. Piltant, gives our “Theorem of reduction of singularities in dimension three”. After a tour d’horizon, we will discuss technicalities of the most peculiar situations.

In this talk, we present the project of Phd Thesis of Rafael Martin, a speaker’s student (together with J.-P. Rolin as co-advisor). It deals with the study of the subanalytic geometry associated with the ring of real convergent generalized power series (convergent power series
for which the exponents in each variable is a special well ordered subset of the real -eld). The aim is to prove a Hironaka’s Rectilinearization Theorem in this framework. We discuss here one step contributing to this program: the monomialization of generalized power series by means of blowing-ups.Permanent Address: F. Sanz, University of Valladolid, Departamento de
-Algebra, Geometr–a y Topolog–a, Facultad de Ciencias, Prado de la Mag-
dalena s/n, E-47006, Valladolid (Spain). Fax: (34) 983 423788
E-mail address:
Date: March 2, 2010.

It is known since the works of Zariski in early 40ies that desingularization of schemes along valuations (called local uniformization of valuations) can be considered as the local part of the desingularization problem. It is still an open problem if local uniformization exists for varieties of positive characteristic and dimension larger than three. The main result I will discuss in this lecture is that local uniformization of varieties exists after a purely inseparable extension of the field of rational functions, i.e., any valuation can be uniformized by a purely inseparable alteration. If time permits I will also discuss conjectural generalizations to all quasi-excellent schemes (including the mixed characteristic case) which, as I expect, can be proven by a similar method.

We wish to thank the following institutions for their help :