This meeting aimed at getting together young researchers, working around condensed matter and quantum mechanics. Topics included Micromagnetics, Bose-Einstein condensation, Vortices and Skyrmions, Relativistic Quantum Mechanics and Anderson Localization. The speakers are mainly PhD students or postdoctoral researchers, and talks are intended to both mathematicians and physicists. 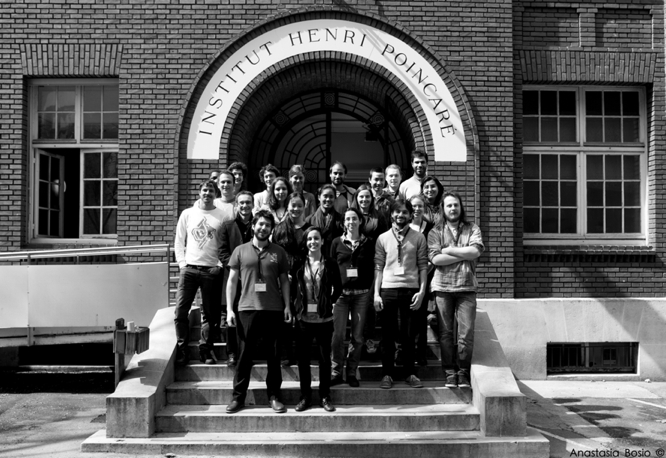 Title and summary of talks – Slides

Exciton-polaritons are quasiparticles that are formed when excitons in a quantum well are strongly coupled to light. Recently, exciton-polariton condensates have been produced, providing opportunities to study quantum many-body physics in a system that can be probed optically. The optical coupling also means well established quantum control techniques such as adiabatic rapid passage (ARP) can be used to manipulate the system. I will discuss the use of ARP to prepare initial many-body polariton states. In particular, it is possible to realise a « quantum quench » that is analogous to the Cooper instability thought experiment in superconductivity. Mean-field theory predicts that the time evolution should lead to a non-equilibrium condensate with oscillating amplitude. However, beyond mean field theory this state is instead unstable to the creation of a density modulated phase, which can exhibit pattern formation.

In this work we study the magnetic solitons and its topological transitions, both theoretically and numerically. In the first part, we find a particular configuration of what is denominated the Bloch Point, a three-dimensional solution of the Free Energy minimization with exchange, Landau and dipolar terms. Oscillations around the Bloch point are found and quantized in order to understand the role of quantum fluctuations over its stability.
In the second part, we look at the evolution of a system coupling ferromagnetic textures with nontrivial topology, with itinerant electrons. The interaction between the magnetic texture and the electrons is understood by means of spin-torque phenomena. This physical system is modeled with the equation Landau-Lifshitz-Gilbert equation coupled with Schrödinger equation for quantum electrons. Topological transitions are observed and understood in a general framework that unifies older works done in a more classical context. Among the large amount of topological transitions observed, we can distinguish the different roles played by electrons depending on parameters. The orders of magnitude of time and space in the topological transition events show the importance of quantum effects as well as the fundamental role of discretization.

The aim of this talk is to introduce the topic of Random Schrödinger Operators and in particular the Anderson model. We will give a simple proof of the asymptotic of the integrated density of states (the normalized eigenvalue counting function) at the bottom of the spectrum and discuss the weak disorder regime.

Quantum chromodynamics (QCD) is the theory of strong interaction and accounts for the internal structure of hadrons. Physicists introduced phenomenological models such as the M.I.T. bag model, the bag approximation and the soliton bag model to study the hadronic properties.

Bose Condensates play host to many types of topological defect such as solitons or vortices. I will introduce, from a physical viewpoint, the hierarchy of defect in single condensates before moving on to spinor condensates. Their experimental realisation motivates numerous questions regarding their dynamics and interaction, which can be described in terms of a wave function that satisfies the cubic nonlinear Schrodinger equation. My talk will concentrate on a treatment of the associated energy functional to quantify – numerically – some of these features.

Evelyne Miot : Asymptotics of Landau-Lifshitz-Gilbert equation in a thin-film limit

We study the Laudau-Lifshitz-Gilbert equation, which is a model for the motion of the magnetization in thin ferromagnetic samples. We focus on the asymptotic thin-film regime where Néel walls nucleate and cost less energy than the vortex defects (Bloch lines), and we establish compactness and energy concentration results.

This is a joint work with Raphael Cote and Radu Ignat.

We will explain why the ground state energy of a large system of interacting bosons can be approximated by Hartree’s theory, in which all particles are assumed to be in the same quantum state. Based on the quantum de Finetti theorems and the geometric techniques for many-body systems, our approach does not rely on any specific property of the interaction between particles and it applies, for example, to bosonic atoms and boson stars. The talk is based on joint work with Mathieu Lewin and Nicolas Rougerie.

A k-component Bose-Einstein condensate is described, in the approximation of an ultracold dilute Bose gas, in terms of k wave functions which solve a system of coupled Gross-Pitaevskii equations. It has been experimentally observed that the different wave functions may repel each other and arrange in segregated domains. This phenomenon is called phase separation. It takes place when the coupling terms of the system are multiplied by a large parameter (competition parameter).
We study the phase separation in the approximation of real valued solitary waves, on a bounded domain of R^2, with zero boundary conditions. For a sequence of solutions with bounded energy we prove convergence to a segregated limit configuration, as the competition parameter tends to infinity, in the space of Hölder continuous functions. We also show that the limit configuration is Lipschitz continuous, which is the best possible regularity. The techniques applied are typical of free boundary problems: blow up technique and monotonicity formulae. Joint work with H. Tavares, S. Terracini and G. Verzini.

New schemes propose how artificial gauge fields may be imprinted on ultracold atomic gases in optical lattices, allowing experiments to access strongly correlated phenomena. In particular, fractional quantum Hall physics may be explored in systems where the lowest energy band resembles a Landau level, as in the proposed ”optical flux lattices”. These energy bands have a nonzero Chern number and are topologically nontrivial. The physical properties of such a band are encoded not only in its energy spectrum over the Brillouin zone (the ”bandstructure” in the usual sense) but also importantly, in its Berry curvature. When the Berry curvature is nonzero, it can have many important physical consequences; for example it can modify the semiclassical dynamics of a wave packet undergoing Bloch oscillations. We will explain how experimentalists may turn such physical consequences into new tools to determine the topological properties of a band. We will discuss how Berry curvature effects may be observed in ultracold gases and give examples in systems relevant to future experiments. [H. M. Price and N. R. Cooper, Phys. Rev. A 85, 033620 (2012)].

Simona Rota-Nodari : Mathematical study of a nonlinear model for nucleons

In this talk we consider a model for a nucleon interacting with the $\sigma$ and $\omega$ mesons in the atomic nucleus. The model is relativistic, but we study it in the nuclear physics nonrelativistic limit, which is of a very different nature from the one of the atomic physics. In this case, the model is described by a nonlinear Schrödinger-type equation, where the mass depends on the solution itself.
I will present some existence results for this equation and I will show that, for a good choice of parameters, the very striking shapes of mesonic densities inside and outside the nucleus are well described by the solutions of our model.
The talk is based on joint works with Maria J. Esteban and Loïc Le Treust.

A bosonic analogue of the fractional quantum Hall effect occurs in rapidly rotating trapped Bose gases: There is a transition from uncorrelated Hartree states to strongly correlated states such as the Laughlin wave function. This physics may be described by effective Hamiltonians with delta interactions acting on a bosonic N-body Bargmann space of analytic functions. In this talk I study such a Hamiltonian, describing a rapidly rotating Bose gas in an anharmonic trap. Conditions for the ground state of the system to be asymptotically strongly correlated are derived. Our main tool for the derivation and interpretation of the results is the plasma analogy that compares the matter density of the Laughlin state with the Gibbs measure of a 2D classical Coulomb gas. New estimates for the latter system are presented.

Recent experimental activities of boson trapping on a ring geometry open the way to explore a novel topology. We focus on a tight ring trap with strong transverse confinement leading to an effectively onedimensional motion along its circumference.
We consider a strongly interacting bose gas on the ring subjected to a localized barrier potential which is suddenly set into motion. Using the time dependent BoseFermi mapping [1] an exact solution for the dynamical evolution in the impenetrableboson (Tonks-Girardeau) limit is obtained. The exact solution allows to obtain the particle current, the particle current fluctuations and the drag force acting on the barrier [2]. In the weak barrier limit the stirring drives the system into a state with net zero current and vanishingly small current fluctuations for velocities smaller than v_c = \pi\hbar/mL, with m the atomic mass and L the ring circumference. The existence of a velocity threshold for current generation indicates superfluidlike behavior of the mesoscopic Tonks-Girardeau gas, different from the nonsuperfluid behavior predicted for the TG gas in an infinite tube. At velocities approaching integer multiples of v_c, angular momentum can be transferred to the fluid and a nonzero drag force arises. At these velocities we predict the formation of a macroscopic superposition of a rotating and a nonrotating Fermi sphere of the mapped Fermi gas [3]. We calculate the momentum distribution, time of flight images and the Wigner function of the Bose gas, the latter allowing to identify quantum interferences in the superposition. We find that the barrier velocity should be larger than the sound velocity for a better discrimination of the two components of the superposition.
References : [1] M. D. Girardeau and E. M. Wright, Phys. Rev. Lett. 84 5691 (2000)
[2] C. Schenke, A. Minguzzi and F. W. J. Hekking, Phys. Rev. A 85, 053627 (2012)
[3] C. Schenke, A. Minguzzi and F. W. J. Hekking, Phys. Rev. A 84, 053636 (2011)