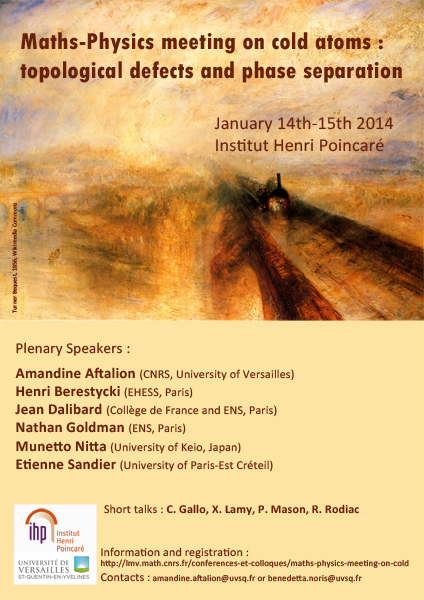 Title and summary of talks

I will describe both numerical and theoretical results concerning two component condensates. In the coexsitence case, i will describe how to obtain an asymptotic expansion of the energy taking into account the various types of defects. The first term in the expansion is related to the Thomas Fermi limit of the profile and relies on singular perturbation techniques. The next ones require a more precise analysis of the defects and lead to a vortex/spike core and square lattices. In the segregation limit, I will explain how some cases can be analyzed through a Gamma limit leading to a phase separation problem of de Giorgi type, and how we hope to extend the analysis to spin orbit problems.

A phase separation model for multiple states Bose-Einstein condensates involves a system of nonlinear elliptic equations with a strong interaction term. The study of population models for competing species having a strong competition term leads to a similar type of problem. In this lecture, I will discuss some mathematical issues for this type of systems. A first task is to prove a priori estimates allowing one to derive the limiting system. Then, one is interested in the existence and classification of solutions to the limiting system. We obtain such results in dimension 1 and show that in dimension two we need to take into consideration the behavior at infinity or we impose a stability condition. The construction is also extended to multi-component elliptic systems. This study leads us to formulate extensions of a celebrated conjecture of De Giorgi to such systems. I report here on two joint works, one with T-C. Lin, J-C. Wei and C. Zhao and another one with S. Terracini, J-C. Wei and K. Wang.

Quantum gases of neutral atoms are often considered as convenient tools to simulate condensed matter phenomena. Indeed these gases can be placed in tailored potential landscapes, such as harmonic, periodic or disordered. Also the interaction between atoms can be controlled and adjusted, both in sign (attractive or repulsive) and in strength, in order to mimic the various situations that are encountered in real materials.
However, one missing item in this “simulation toolbox” seems to be the charge of the particles : the electrons that are in play in real condensed matter phenomena have a non-zero charge. This charge gives rise to a wealth of important phenomena related to orbital magnetism, when the material is placed in a gauge potential corresponding to a non-zero magnetic field.
I will review in this talk some of the lines that are currently explored to fill this gap, and possibly reach with cold atom gases one of the landmarks of orbital magnetism, namely the fractional Quantum Hall effect. I will mostly focus on the case of atoms moving in a periodic potential (optical lattices), where the energy spectrum for the motion of a single atom consists of bands. I will explain how one can take advantage of the geometric phases appearing in these lattices, in order to reach a situation that is formally similar to that of quantum charges moving in a magnetic field. The implementation of these phases can lead to a non-trivial topology of the energy bands, a connection that will subsequently be deepened and illustrated in the talk given by Nathan Goldman.

Topology is the art of classifying objects based on their global properties. In this mathematical framework, two objects are considered to be equivalent if they can be smoothly deformed one into the other. In order to identify whether two objects indeed belong to the same class, one introduces a topological invariant : a quantity that remains constant against smooth deformations, and which unambiguously characterizes the different topological classes. A standard example of such invariants is the number of holes penetrating two-dimensional surfaces.
Interestingly, topological invariants play a role in quantum physics, where they guarantee the existence and robustness of interesting observable effects. In condensed-matter physics, the remarkable quantization of the Hall conductivity at low temperatures can be formally related to the Chern number, a topological invariant that classifies fibre bundles. More recently, a wide family of topological quantum phases (i.e. topological insulators and superconductors) have been predicted. The experimental realization of these phases, together with the development of probes able to detect their unusual properties, constitutes a major challenge of contemporary physics.
In this talk, I will first discuss the possibility to realize topological states of matter using cold atoms trapped in optical lattices. I will focus on a specific implementation of a simple lattice model exhibiting non-trivial topological energy bands. Then, I will present several methods to identify clear manifestation of topology in these atomic setups. In particular, I will show how the topological Chern number can be directly measured using available techniques.

I will define the coulombian interaction of infinitely many positive charges in the plane with a uniform negative background (the system refered to as a jellium). I will give some of the basic properties of this energy proved in collaboration with S.Serfaty and describe recent results obtained with Y.Ge which aim at characterizing finite energy configurations.

We describe the behaviour of the ground state of a system of two coupled Gross-Pitaevskii equations in the Thomas-Fermi limit, using asymptotic expansions ot these ground state into powers of the semi-classic parameter.

In nematics, molecules tend to align in some preferred direction. The resulting orientational order may be biaxial, or display uniaxial symmetry. Although uniaxial symmetry is often assumed, it is well-known that energy-minimizing configurations might prefer biaxiality : it happens for instance at low temperatures or for large material distortion. We will present a new insight into this phenomenon : within Landau-de Gennes’ model, uniaxial symmetry is actually incompatible with the equilibrium equations themselves, except in the presence of other natural symmetries. For instance, in a spherical droplet with strong radial anchoring, a uniaxial equilibrium must be the spherically symmetric ’hedgehog’ defect.

I will talk about recent work, in collaboration with Amandine Aftalion, in which we look to a spin-orbit coupled Bose-Einstein condensate. I will show numerically obtained phase diagrams for the condensates in the presence of rotation and explain a variety of the observed ground states under the Thomas-Fermi approximation.

In this talk I will introduce a mathematical model of supra-conductivity called the Ginzburg-Landau (G.L) equations with semi-stiff boundary conditions. This model is intermediate between the full G.L equations (with magnetic field) and the simplified G.L equations (without magnetic field but with Dirichlet boundary condition). The semi-stiff G.L problem is a variational problem with lack of compactness and the existence of solutions is not guaranteed. We will focus on doubly connected domains and in fact we will first present some results about a simpler problem : the existence of minimizers of the Dirichlet energy with semi-stiff boundary conditions. From this study we will deduce some existence results for the G.L equations when the G.L parameter is small.